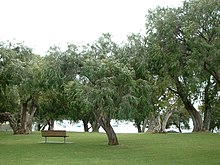 A. flexuosa at foreshore parkland on the Swan River, Keanes Level, Peppermint Grove.

Agonis flexuosa is a species of tree that grows within the south west of Western Australia. It’s simply the most typical of the Agonis species, and is without doubt one of the most recognisable timber of Western Australia, being generally grown in parks and on street verges in Perth.

The species is often often known as Western Australian peppermint, Swan River peppermint or peppermint, and willow myrtle for its weeping behavior.

A. flexuosa happens primarily as a small and strong tree, often lower than 10 metres tall, though it might develop to 15 metres. It has fibrous brown bark, lengthy slim dull-green leaves, and tightly clustered inflorescences of small white flowers within the axes. It grows in a weeping behavior, and appears remarkably just like the weeping willow from a distance. Leaves are slim and attain a size of 150mm. It’s most readily recognized by the highly effective odour of peppermint emitted when the leaves are crushed or torn.

It flowers between August and December. The fruit is a tough capsule, 3 – 4 mm throughout, with three valves containing many small seeds.[3]

The genus title Agonis comes from the Greek agon, “a cluster”, referring to the association of the fruits. The species title flexuosa is Latin for “filled with bends”, referring to the zig-zag course of the stem, which modifications route at every leaf node. It was initially positioned within the genus Leptospermum by Sprengel in 1819, however Schauer positioned it in Agonis in 1844.

The 2 recognised varieties are,[4]

Horticultural variants are in all probability derived from the widespread inhabitants, rising as shrubs or timber and maybe being flowerless. Some commercially produced cultivars embrace Agonis ‘Belbra Gold’ and Agonis ‘Fairy Foliage’.[4] The cultivar Agonis ‘Nana’ is a dwarf kind that’s generally seen in Perth as a hedge.

Agonis flexuosa happens in a subcoastal strip from simply north of Perth, southward by the Swan Coastal Plain, then alongside the coast to outlying information east of Bremer Bay (34°23’S).

The habitat consists of limestone heath, steady dunes, and sandy soils; often inland from the shoreline, and it additionally grows as an under-story plant in Tuart forest.[3]

Usually there are few species that develop underneath flexuosa timber, because the leaf litter can suppress understorey species.

Flexuosa and var. Nana reply nicely to pruning and is commonly pruned again to its essential trunk to advertise new progress and to maintain a tidy and dense cover. With out pruning, the cover can turn into skinny. The species, in some circumstances – resembling when grown on rocky, terraced terrain – can develop buttress roots, however seldom does in flat, sandy areas. Flexuosa timber can even have a twist or spiral impact within the bark of their essential trunks that will increase with age, often evident in seedlings.

It isn’t a species that’s used for Bonsai.

The Noongar peoples used the plant leaves as an antiseptic; sapling trunks have been used as spear shafts and digging sticks.[2]